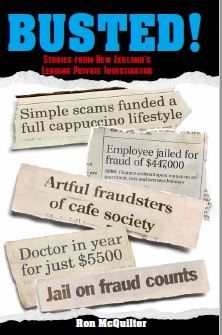 BUSTED looks at the intriguing world of Investigating numerous complex cases in New Zealand and how technology has helped (and sometimes hampered) successful out-comes. It’s an eclectic collection of stories to show you the real world of a private investigator or PI – the warm, fuzzy jobs, the ugly ones and the downright bizarre .
Being a private eye is not really a job, it’s more like a hobby in which you get to hunt down bad people and are paid for doing so. Every job is an adventure, although it’s not at all like the way it’s depicted on television – it’s far worse.
For over thirty five years, New Zealand’s leading Private Investigator, Ron McQuilter has investigated nearly every possible investigative request. Staff theft, insurance scams, dubious warehouse dealings, fraud, blackmail, infidelity and recidivist criminal activity – just to mention a few!
Despite decades of experience as a PI under his belt, Ron has on occasions fallen into the trap of thinking he had seen it all. However, clients can be just as devious as the people he’s asked to investigate. Not many people can say that their working day entailed a prominent New Zealand Barrister summoning you to their office, then handing you a container with a pubic hair inside that had been found in their bed and asking you to find the owner. One of many strange requests.
They say that patience is a virtue, and Ron has exhibited this trait over the thousands of cases he has overseen. But not every case goes to plan – such as patiently ‘staking out’ a commercial premise in full camouflage (dressed as a bush) and an unwitting member of the public using his ‘cover’ as a good place to relieve himself!
BUSTED is a wonderful look into the work of the Private Investigator in New Zealand. All the cases contained in BUSTED did happen IN New Zealand, and the reader will probably remember a number of the cases. A lot of cases required good investigative work, some needed luck. Some were sad, some vicious. None were boring!

Ron is a career investigator, brought up in the ‘hard’ part of Glasgow. He joined the Glasgow police at 19 and was posted to the Gorbals, famous for its high crime rate. He fell in love with a Kiwi girl and immigrated to New Zealand in 1983 where he became a private investigator. He is the founder and still heads up Paragon, New Zealand’s largest PI firm, with a team of agents and several national contracts. Ron has featured as one of the Missing Pieces team on TV3, specialising in tracking down lost family members. In 2008 he traveled solely to London and managed to solve a 6 year cold case involving a missing New Zealand man. For the past 37 years Ron has worked to enhance the reputation of PI’s in New Zealand and is chair of the professional body. He now lives in Mount Maunganui, and has stopped jumping out of planes, instead playing golf and working on cases that interest him.