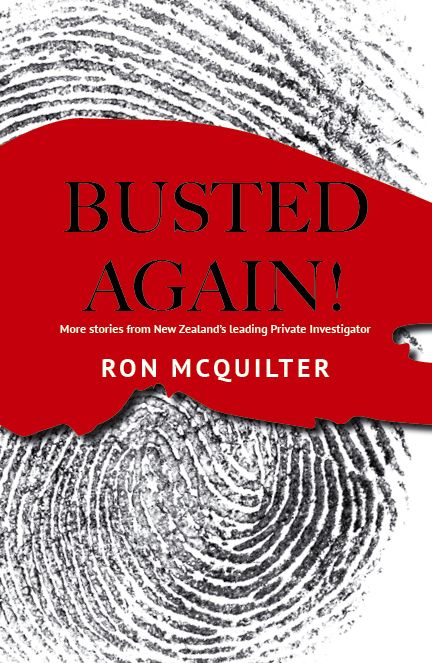 What the critics said about BUSTED!:

Following on from the hugely successful ‘BUSTED! Stories from New Zealand’s Leading Private Investigator’ (also available from New Holland), Ron McQuilter tell more stories of the incredible New Zealand cases in which he has been involved.

Extortion, fraud, insurance scams and workplace theft are just some of the intriguing stories in ‘BUSTED AGAIN.’

Why was Ron targeted to be arrested in one of New Zealand’s biggest film piracy cases?

What happened when a crank call was, in fact, a Billionaire needing Ron’s help in a very ‘delicate’ matter?

How did a ‘suspect’ insurance claim and subsequent investigation become an urgent case to recover something personal that wasn’t on the insurance claim?

BUSTED AGAIN highlights the bizarre, the unexpected, the outrageous and, in some cases, the comical side of life.

Follow the stories and the absurd extent people will go to evade detection.

Ron McQuilter is a career investigator, brought up in the “hard” part of Glasgow. He fell in love with a Kiwi girl and immigrated to New Zealand in 1983. He has become the country’s most prominent Private Investigator and regularly features on television, radio and print media. This is his second book.