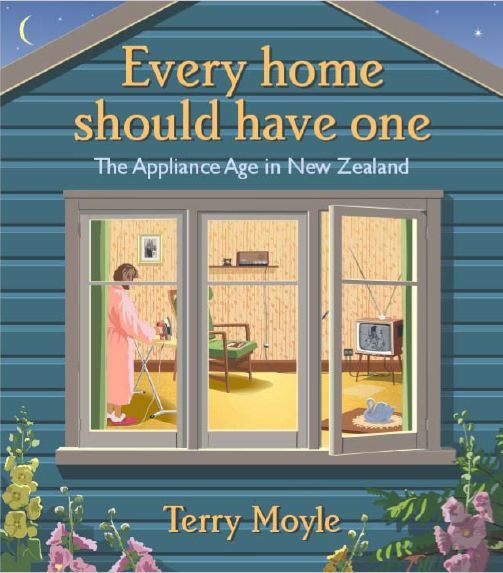 Every Home Should Have One!

The Appliance Age in New Zealand

New Zealand’s homes were filled with appliances, and behind every refrigerator, television and kitchen appliance there is an interesting story that tells of the growth of consumerism in New Zealand. Do you remember your Grandmother’s lounge (on the brown carpet) a small black and white TV in an ornate wooden frame took pride of place, eliminating the wireless for the first time?

After World War II, New Zealand became a consumer society where every family wanted the latest appliance. It was the perfect way of ’showing off’ to the neighbours and say (subliminally) that things were going well. Remember the introduction of the TV or did you have to go to and watch at the neighbours? Who was the first on your street to get to get a colour TV?

From heaters, vacuum cleaners, wireless radios, refrigerators, toasters, irons, kettles, ovens, televisions & Microwave Ovens—we loved to show off our latest ‘gizmo’s to our friends and neighbours. Packed with colourful photography and hilarious (by today’s standards) magazine advertisements of the day, will transport you to a time when having a Microwave was a BIG deal (even though most people just boiled water in them initially)! Names like Fisher & Paykel, Kelvinator and Shacklock are the heart of our homes and this book tells the story of all the local companies and how they ‘stretched the truth’ in trying to get Kiwis to get their product in the home.

Nearly 300 pages, 80,000 words and over 350 photographs, newspaper advertisements and detailed and superbly researched history of the local manufacturers throughout New Zealand makes this book and important part of the way we grew up and how our homes evolved to what they are today.

Every page is a ‘I remember that’ moment!

Terry Moyle and Rosie Louise together run Contour Creative, a design studio and agency based in Kaiwaka, Northland. They have created a vast resource of New Zealand reference material using Vector graphic illustration. CCS has provided illustration to books in Europe, United States and Australasia.

Terry & Rosie have previously written three books (all with New Holland) – ‘Art Deco Airports: Dream designs of the 1920s and 1930s’. His next book, ‘Art Deco New Zealand’ was a huge seller for tourists and Kiwi’s alike & ‘The First - The Walsh Brothers and the Aeroplane Days of Edwardian New Zealand’

Terry Moyle is a professional artist, author and poet. His titles with New Holland Publishing are Art Deco Airports looking at the relationship between aviation and Art Deco design in the 1920s and 1930s and Art Deco New Zealand: An Illustrated Guide. Terry collaborates with artist Rosie Louise as Contour Creative Studio. He resides in the Kaipara town of Kaiwaka, New Zealand. Terry was born in Matamata and has an MA (Hons) in English literature from the University of Waikato.