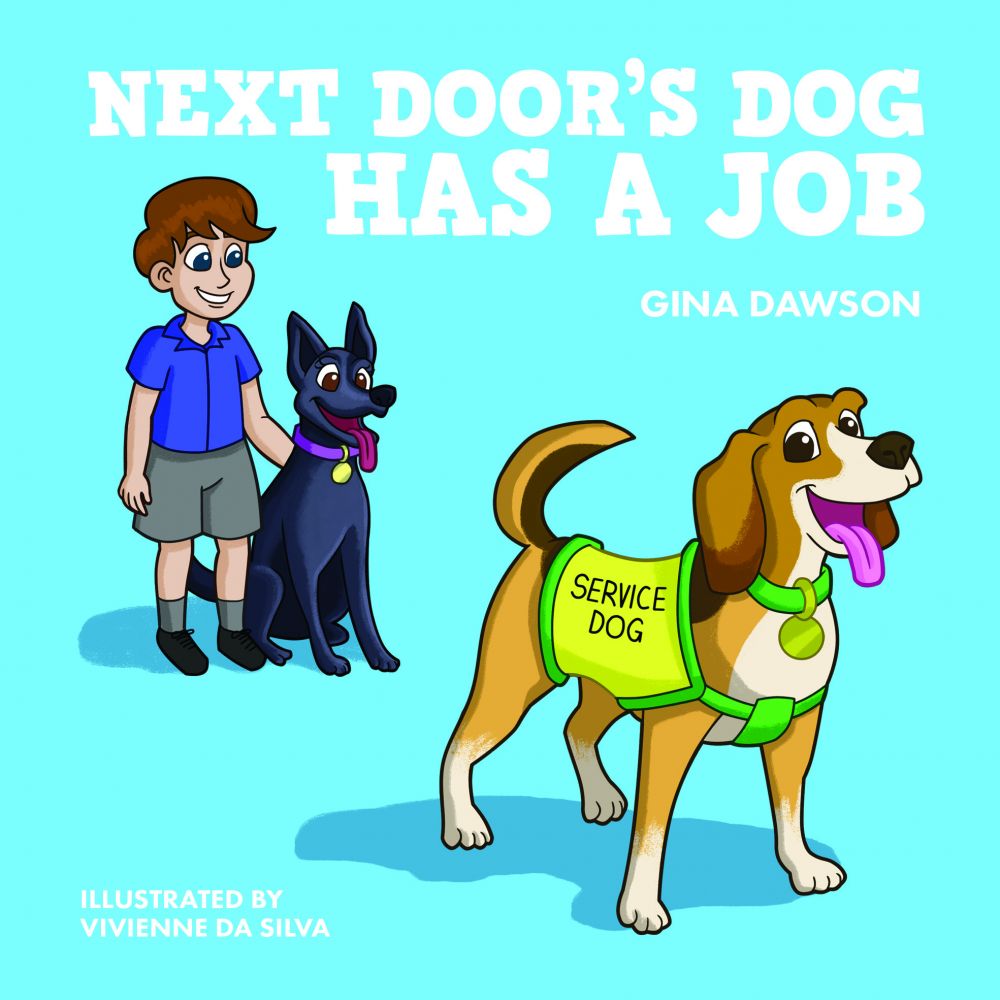 Next Door's Dog Goes To School

Next Door's Dog Has A Job

This beautifully illustrated picture book provides age appropriate information for young children, including: • Disabilities can be diverse and invisible • Assistance Dogs come in many shapes and sizes • Assistance Dogs help people in a variety of ways, and • There is an appropriate code of behavior around a working Assistance Dog who are highly trained to assist their human companions in a number of ways. These include, but are not limited to, providing assistance to those with vision, hearing and mobility impairments, epilepsy, autism and mental health conditions including Post Traumatic Stress Disorder and anxiety.

Most of us are aware of teaching children to be “dog smart” and not approach unknown dogs in any situation, however the novelty of seeing a dog in a supermarket, restaurant or other public place where that may not be the norm can be a fascinating attraction to a young child. Children should be aware of the physical or emotional difficulty that may be imposed on the dog’s handler when the dog is distracted. Discuss with the child the importance of the work these dogs perform as a team with their human companions. Emphasise that the relationship between dog and handler is a two way one, and that the dog is not just doing a job but is a highly valued, much loved and well cared for family member.

Gina Dawson is a teacher who spent fifteen years presenting programs on a variety of social and personal issues to students of all ages across all school sectors. She knows how to present facts on a range of topics and promote discussion in a way that is fun, non-threatening and entirely comfortable. As well as her interest in youth well-being, Gina is a lifelong lover of dogs, an experienced trainer and is cognizant of the disability sector. She volunteers for a Service Dog organisation and is keen to educate children about the many roles dogs play in society. Now retired, Gina’s passion is writing children’s books that educate and promote awareness, as well as ghost writing memoirs. Her other interests include reading, walking, architecture, travelling, and spending time with family, friends and of course her dog.

Vivienne da Silva is an Adelaide-based artist and published illustrator who has been drawing since she was old enough to hold a pencil. Born in Australia to Brazilian family, she is fluent in two languages and has two degrees: a Bachelor of Arts from Flinders University and a Bachelor of Design Communication from The University of South Australia. She has also studied art at CDW Studios (School of Visual Effects and Entertainment Design) of Adelaide. In 2017, she collaborated with South Australian author Gina Dawson to illustrate her first children's book Next Door's Dog Has A Job, which was released worldwide by New Holland Publishing in 2018. The second book in the series, Next Door’s Dog Goes To School, was released in 2019. The third book in the series is due to be released in 2020! In her spare time she sketches, paints watercolours and designs t-shirt logos for her favourite TV shows and movies, some of which have been featured on the front pages of Redbubble, TeeFury and Threadless Tees.