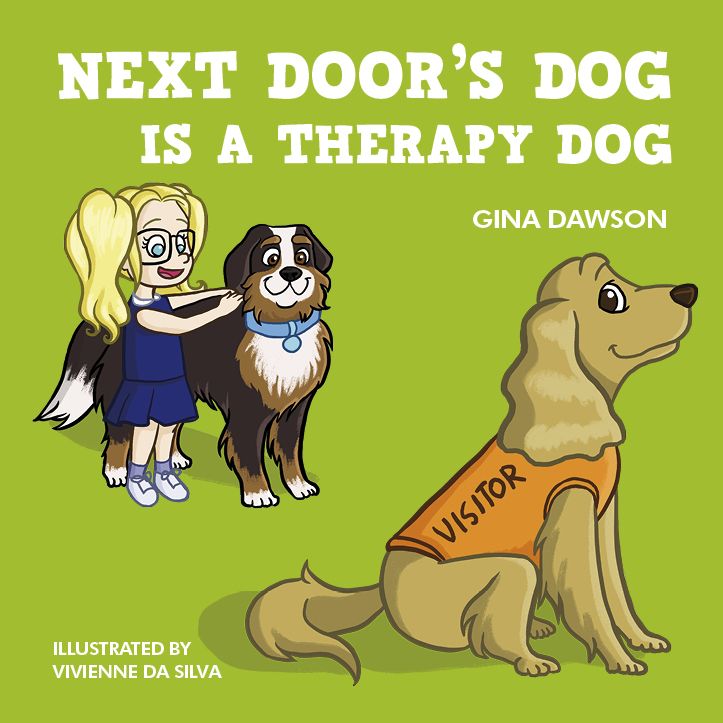 We Can Deal With Bullying

Next Door's Dog Is a Therapy Dog

Leah lives next door to Nan. Every week Nan and her dog Monty visit sick people in hospital. Today Leah is going too. At the hospital Leah looks on while Monty makes people laugh, remember, learn, feel comforted and make plans to get well. She sees that Monty is very special, he is a Therapy Dog.

Next Door’s Dog is a Therapy Dog is the third book about working dogs by Gina Dawson, each written to educate children about the various roles that working dogs have in modern society, and the importance of having the right dog on the job.

Gina Dawson is a teacher who spent fifteen years presenting programs on a variety of social and personal issues to students of all ages across all school sectors. She knows how to present facts on a range of topics and promote discussion in a way that is fun, non-threatening and entirely comfortable. As well as her interest in youth well-being, Gina is a lifelong lover of dogs, an experienced trainer and is cognizant of the disability sector. She volunteers for a Service Dog organisation and is keen to educate children about the many roles dogs play in society. Now retired, Gina’s passion is writing children’s books that educate and promote awareness, as well as ghost writing memoirs. Her other interests include reading, walking, architecture, travelling, and spending time with family, friends and of course her dog.

Vivienne da Silva is an Adelaide-based artist and published illustrator who has been drawing since she was old enough to hold a pencil. Born in Australia to Brazilian family, she is fluent in two languages and has two degrees: a Bachelor of Arts from Flinders University and a Bachelor of Design Communication from The University of South Australia. She has also studied art at CDW Studios (School of Visual Effects and Entertainment Design) of Adelaide. In 2017, she collaborated with South Australian author Gina Dawson to illustrate her first children's book Next Door's Dog Has A Job, which was released worldwide by New Holland Publishing in 2018. The second book in the series, Next Door’s Dog Goes To School, was released in 2019. The third book in the series is due to be released in 2020! In her spare time she sketches, paints watercolours and designs t-shirt logos for her favourite TV shows and movies, some of which have been featured on the front pages of Redbubble, TeeFury and Threadless Tees.