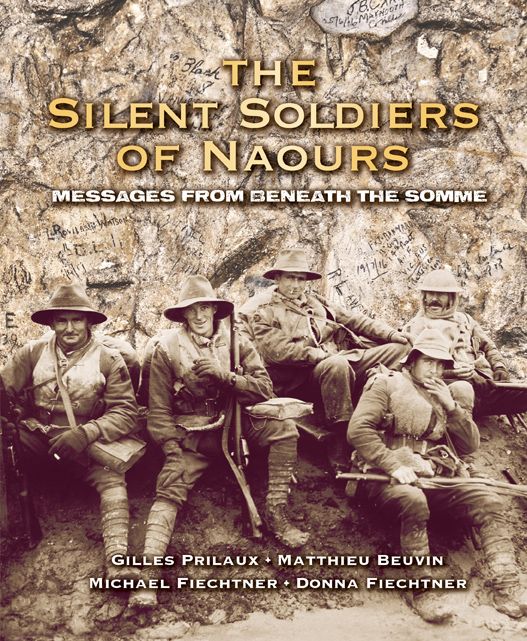 The Silent Soldiers of Naours

$35.00
ISBN
9781742579719
Details
Recently rediscovered in hidden chambers in the north of France is an incredible secret of the Battle of the Somme and World War I. The signatures and graffiti of French, English and Australian soldiers tell a story of lives long lost but now found. The Silent Soldiers of Naours is the story of how French and Australian researchers rediscovered the incredible stories of what happened to these men. A large group of French archaeologists have been exploring more than 250 World War I sites since 2001. Having been involved in the Lost Diggers of Vignacourt project, an Australian group of researchers became involved with Gilles Prilaux and his team working in a small village near Vignacourt that was once behind the lines during WW1. Beneath a small village named Naours, over 3000 signatures are recorded on the walls of a network of ancient underground caves. Most of the signatures were left by ‘Aussie’ soldiers while on leave or training for combat in Vignacourt and surrounding areas. Michael and Donna Fiechtner have been involved in the investigation of these signatures and a French archaeological team headed by Gilles Prilaux has been matching the signatures with the names and biographies of past soldiers. After leaving their names etched in history many went off to WWI battlefields, never to return. Here is a military book with a heart … images of signatures and graffiti (drawings) matched to the names of Australian soldiers with full biographies and accompanying pictures and documentation. It is a unique story that offers something new to readers interested in the history of World War I.
About the Author(s)

Gilles Prilaux is an archaeologist at the National Institute of Preventive Archaeological Research (INRAP). He is a Research Engineer and Deputy Scientific and Technical Director. He holds a Master’s degree from the University of Dijon and a Diploma of Advanced Studies from the University of Artois. He is attached to the University of Charles de Gaulle-Lille 3, Halma-UMR 8142 CNRS, on a program on the ages of Salt in Western Europe. He has been conducting archaeological excavations in France for over 27 years and since the mid-1990s he has specialized in the archeology of the Great War

Matthieu Beuvin is Director of Cultural Affairs of the Bocage-Hallue Community of Communes (Somme). After a scientific baccalaureate, he studied geography at the University of Picardie Jules Verne in Amiens. As a student, he was also an animator and director of children’s holiday centres. He began his professional career in 1999 as a Youth and Cultural Coordinator. In 2002 he obtained a State Certificate of ‘Cultural Mediator’ and then became Head of the Bocage-Hallue Cultural Service. In December 2013, he took charge of the cultural and heritage development project of the Underground City of Naours.

Michael and Donna Fiechtner are qualified educationalists who founded InterCultural Consulting Group in Brisbane to offer educational ,cultural and historical experiences for a wide range of age groups – from school-aged children to retirees. ICG has provided educational opportunities in Japan and has a unique relationship with The Hiroshima Peace and Culture Foundation. Recently, ICG has turned its attention to the battlefields of France and Belgium, hosting tours of WWI and WWII sites. The Naours story and assisting it to be discovered by others is one of their latest projects.