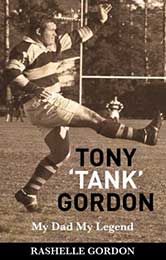 My Dad, My Legend

On 25 March 2012 Tank Gordon was taken from this world, but he has left behind a legacy in rugby league and his story.

On the rugby field he was a TANK who would run straight over the top of anyone that got in his way. His almighty kick drew gasps from the crowd. But there was a lot more to him than just a great footy player. Tank was a partner, a son, a brother, a mate and, above all else, a dad. In 1987 he took a Kiwi side of largely unknown and amateur players to upset Australia while he also helped the Bay of Plenty and Coastline league sides to some memorable wins and major trophies. His coaching career also included stints in the United Kingdom where he coached the London Crusaders and Hull and the Bay of Plenty Rugby league side in New Zealand. Written by his daughter Rashelle, this book takes the reader through all the stages of this legends life. He developed rugby league in New Zealand, was dedicated to charities and helping communities. He also saw down-and-out days when he struggled to feed his family, fighting a gambling addiction, and even finding himself in jail. This story is not just about the footy although there is plenty of that - but about the life of one of New Zealands rugby league legends.

Born in Auckland, New Zealand Rashelle enjoyed a happy and privileged upbringing with her two older brothers and sister. She has recently spent an incredible 18 months in her homeland with her father whilst writing his captivating life story. Rashelle and her family moved to Australia Gold Coast when she was just four years of age but returned to New Zealand to finish her high school education. From a young age Rashelle had dreams of being a hairdresser and makeup artist, a dream realised when she moved to England and did her hairdressing apprenticeship under one of England most successful and celebrated hairdressers. She won many awards in Great Britain and Europe which led to her having a hair and beauty radio segment, guest ap-pearances on breakfast TV and further accolades. She returned to New Zealand where she began writing a hair and beauty column for a New Zealand newspaper and continued her successful career before returning to Australia. Writing has always been a passion for Rashelle and to be sharing her father story will be her greatest achievement to date.