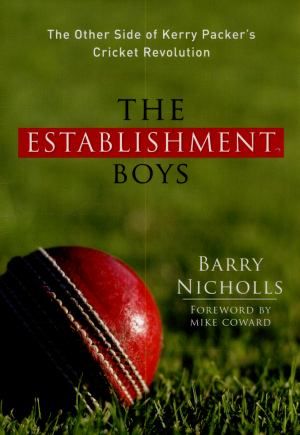 The Test of the Century

This is the story of the Test matches, the series and the tours during the 1977- 79 Australian cricket seasons, in which the untried and largely unappreciated
Establishment Boys carried Australia' s cricketing banner. What effect did this brief time in the spotlight have on the players involved, their careers, families, lives? Who flourished and who didn't? Some players like Allan Border, Kim Hughes, Rodney Hogg and Bruce Yardley found mainstream success when the warring cricket factions reconciled in 1979. The efforts of others, including Graham Yallop, Rick Darling, Craig Serjeant, Gary Cosier and Peter Toohey were either derided by the press or their careers thrown on the scrapheap.
This is their story.

During the 1977/ 78 and 1978/ 79 cricket seasons, there were two Australian cricket teams existing in seemingly parallel universes: the glamorous, rock-star players of World Series Cricket run by media mogul Kerry Packer; and the traditional Australian Test team made up of young, poorly-paid players who represented their country in the established international Test arena.
Incredibly, four decades later we know more than ever about the characters and plottwists of the WSC saga, but the story of the players who stuck solid to the Australian Cricket Board is largely forgotten or simply unknown.
Former cricketer, now radio journalist and sportswriter, Barry Nicholls sets the record straight by tracking down those once-young men fairly or unfairly known as The Establishment Boys .

As the 40th anniversary of the great schism looms, Barry Nicholls skilfully and sympathetically revisits this tumultuous time and allows the Establishment Boys to step out of the shadows and for once become the centre of attention.

Barry Nicholls is an award-winning West Australian based broadcaster and journalist who presents a three-hour daily drive program on ABC South West. He also hosts a fortnightly half-hour podcast on sport writing for ABC Grandstand and has presented programs across Australia on ABC Local Radio.