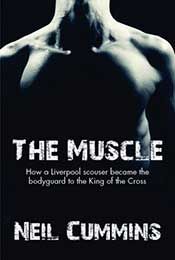 Neil Cummins grew up in Liverpool, England in an environment of hard knocks, bikies and the underworld surrounding his fathers businesses as a nightclub owner.

Neil Cummins grew up in Liverpool, England in an environment of hard knocks, bikies and the underworld surrounding his fathers businesses as a nightclub owner. There came a time when Neil who adored his father started to realise the shady and seedy world of nightclubs and the business associates he looked up to as child were some of the worst and most dangerous criminals in the UK and some involved in drug importing, bikie gangs, robberies, murder and other major crimes . This story follows a young adult man of 19 who moves to Australia with his mother and slowly starts to follow in his fathers life of the underworld and becomes the head doorman and bodyguard to one of Australias most colourful characters, John Ibrahim the owner of some of Sydneys most popular nightclubs, the character based on the Underbelly series, The Golden Mile. Its not long before Neil becomes a close and trusted associate of the Ibrahim family. Becoming Johns number one security guy he was better known as The Muscle. This biography tells the story of a young boy who grew up adoring his father, and how his life on the other side of the world followed in his fathers footsteps as an adult working and socialising with some of the most dangerous criminals in the underworld. From a world of drugs, nightclubs, celebrities, fancy cars, to money and power, bikie gangs and stand over men, hits on peoples lives to drive by shootings , Neils story is a tell all insight to how he lived it and survived it to walk away and live a normal life. Neil discusses what he sees as the number one security man for John Ibrahim and some of the high profile clients who frequented the nightclub scene. His very public marriage and divorce to Tiffani Wood band member of the popular singing group Bardot and now his public child custody battle. The hit he put on his own life, to the stand over tactics that were part of his job, to keeping on the right side of high profile celebrities who frequented the party scene and wanted a supply of drugs, to bikies gangs, shootings, police investigations and much more. This raw and honest story will be a great read for those who love true crime, and the love between a father and son and their survival in a dangerous and seedy underworld.